Author Pippa Goodhart has put together some brilliant ideas for teachers using her book Fair Shares in the classroom. Have a look!

Whether or not something is fair can sometimes be a simple thing to decide, but at other times it isn’t simple at all.

Using lolly sticks with two circles of card stuck either side at one end, your children can make a Fairness Lollipop.
One side should have the word ‘fair’ together with a smiley face. The other ‘unfair’ with a sad face.
With the children ready to give their verdicts, offer scenarios for which they decide what is ‘fair’ or ‘unfair’, eg –

Bring two children to the front of the class, and then produce an apple.

‘Is it fair if I give this apple to Child A, but nothing to Child B?’

‘Is it fair if I give the apple to Child B, but not to Child A?’

‘What if I cut the apple in half, and gave half to each child?’ That’s fair.

But what if, instead of an apple, I was offering an egg? You couldn’t cut that in half …unless you made an omelette from the egg and cut the omelette in half.

What if it was kitten on offer? You couldn’t, shouldn’t, wouldn’t cut that in half! The only fair thing then would be for the children to share the kitten.

Different problems need different solutions. And sometimes there just isn’t a fair solution. For example, if those two children lived in different places, they couldn’t share the kitten. Or, if they did try to, moving the kitten from house to house, is that fair on the kitten? In that scenario, is the only ‘fair’ thing for them both to be disappointed, and neither have the kitten? Then the kitten wouldn’t have a home. Sometimes one of you has to be kind and generous and let something be unfair. Maybe it will be that child’s turn to have something extra lovely next time?

Should they be all given to one child? Or divided, three to one child and two to the other?

Would it be fair to give the children two sweets each, and to throw away the extra one? What if who got
the three sweets was chosen at random, eg by tossing a coin? What’s the fairest way to solve this?

The issues can be made more complex and interesting still by adding further information.

Child A fell over in the playground, and an extra sweet might cheer them up. What is fair then?

Maybe one of the children did an extra task, clearing things away whilst others went out to play. Have they earned something?

The discussion might touch on when food is eaten because you’re hungry, and this is part of a meal, and when it is a treat, and maybe one its good not to have too much of. It might touch on who likes and doesn’t like different foods. It could lead to a discussion about food allergies.

You could then get children thinking about ‘what is fair’ in the context of characters having different needs. 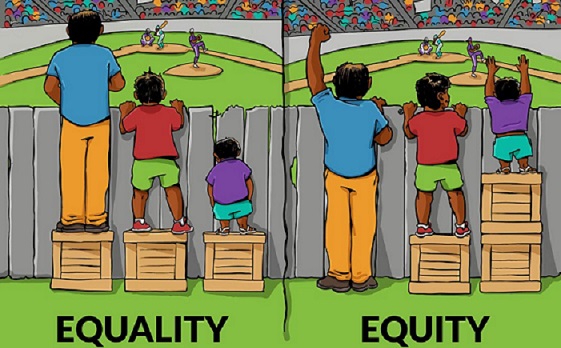 The lesson here is that sometimes it is fair to give one person more than another in order to give them the same chance as others. ‘To each according to their need.’ That makes for a fairer society. Life is already unfair because we are all different and our lives are all different, but we can do what we can to make life fairer. You might ask the children if they can think of examples of that from their own society, eg babies are strapped into car baby seats, older children might have booster seats, and adults just sit in the car seats as they are. Or people giving to charities to help people who need extra money for something. This might even prompt a class project to raise money for some particular charity.

Print out the picture of Bear and Hare and Beetle with empty baskets, and let your child complete the picture by putting into those baskets what fruits they think it would be fair for each of them to have.