Fab book blog Seven Impossible Things Before Breakfast have featured The Little Black Fish! Find out more about this classic children’s book and the incredible illustrations.

Today I’m showcasing some artwork from Samad Behrangi’s The Little Black Fish, illustrated by Hans Christian Andersen Award winner Farshid Mesghali and first published in Persian in Iran in 1968. An English version was translated last year in the UK by Azita Rassi, and in mid-April a version will be on shelves here in the States (Tiny Owl Publishing). 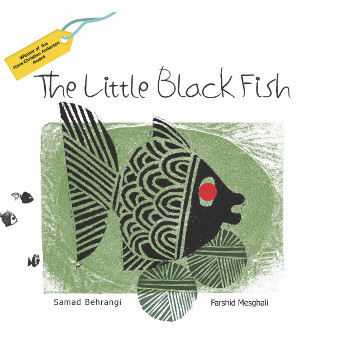 When first published, as noted in a closing note in the book, the story was seen as an allegory “for a nation in which it was dangerous to dare to be politically different.” In fact, the book was banned in pre-revolutionary Iran. In the story, the titular fish dismisses his mother’s warnings about leaving the stream that is his world — and the world that belongs to his friends and family. The Little Black Fish is curious and longs for more. “I don’t want to spend my life swimming up and down and around,” he tells his mother, “and then grumbling that there isn’t anything more to life.”

When he does venture out past the stream, he ends up in the river and, ultimately, the ocean. This story is about the creatures he meets along the way, the advice he is given, and the dangers he faces, including a pelican and then the dark stomach of a seabird. The story is told by a grandmother fish to her many grandchildren and even ends on an open-ended note, the elderly fish telling the over eleven thousand fish she’s entertaining that the fish’s fate is the subject of a story for another night. Evidently, the book, this tale of breaking away from what is expected by one’s family and community, is considered the most famous children’s book in Iran. Here are some more spreads. (Note: The text in the UK version, which is what I have, varies slightly from the U.S. version, pictured here.)